Bulls, Bears and Bisons – a User Guide to Recessions

By Radhika Desai and Alan Freeman

Welcome to our second bulletin. This month features a behind-the-scenes look at the world economy, and a heads-up on why Manitoba is not doing too bad at all.

Economists are often humbled by the Danish proverb that runs “never predict anything, especially the future”. In the present market turmoil it’s difficult to second guess if we are headed for recession, and wise to beware doomsayers who ‘predicted six of the last five crises’. But, as we said last month, the risks are on the down side. The evidence comes not from the future, but from a more careful look at the past. 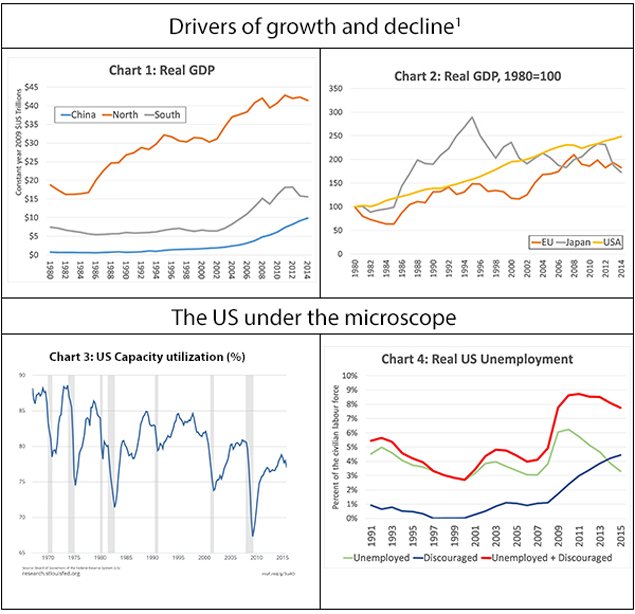 We start with the years since the 2008 crash, which the Fed has quietly renamed ‘The Great Recession’ – making it the third on record.[1] History never repeats, but we can learn from it. The Fed hasn’t, as yet; they say this one ended in 2009. However, the last two didn’t go away quickly – and this one is no exception. Real GDP in the industrialised North is right where it was eight years ago, and the question is not whether the economy is turning down – but whether it ever turned up. If it were not for China and the faster-growing emerging economies, world growth since the crash would be negative.

Contrary to many experts, China hasn’t caused this. True, it is quietly diversifying away from the Pacific economy, investing in Eurasia, and stimulating domestic consumption. But last quarter’s growth at 6.8% – just 2% below peak – is pretty impressive. This mild deceleration pales into insignificance compared with Japan, with real $ output just over half what it was in 1992, or Europe, which has flatlined for nine years.

It’s no prettier under the bonnet. The most telling indicator is capacity utilization – the proportion of existing plant actually being used. This has fallen in every successive cycle since 1970. Ominously, it turned down in December 2014. It then fell every month except one, making 5.5% in all – the biggest annual drop since 2009.

Poor performance can also be obscured by misleading data. The unemployment rate looks good at 3.1%, the lowest since 2007. But the real story is not a big return to work; it’s a big exit from the labour force, which has contracted by 14 million in six years. As John Williams’ useful ShadowStats site shows, this is not about demographics. It’s because Americans are giving up waiting for work – and no longer ‘count’ as unemployed.

So why is the US dollar so high? Here, we’ll venture two small bets: it’s headed down. And don’t hold your breath for a rate hike.

Though many think otherwise, as Radhika Desai has argued, the dollar’s world role has never been stable because of the Triffin Dilemma: the deficits necessary to provide dollar liquidity also drove down its value (See Chart X). Since 1971, when the dollar’s link to gold was broken, the US has counteracted this dilemma by various means: the economy-throttling Volcker interest rate increase in the early 1980s was one. Another was the systematic inflation of dollar denominated asset bubbles like those of recent decades. The dollar survives however because it is the world’s trading currency. and as such is demanded by the financial institutions of the Anglo-American dominated world of dollar-denominated internationalised financeas a safe haven.

Its recent rise, after successive exercises in Quantative Easing (QE) pushed it down, has been fuelled by speculative demand from financial institutions, and by over a year’s of anticipation of rising US interest rates. The recent market turmoil, and the dollar’s recent downturn signals that speculative activity is no longer yielding returns –  the US stock market did not rise in 2015, and nor are bonds.

Moreover, demand for the dollar as a trading currency is also declining as countries around the world make alternative arrangements.  Historically, the restive Europeans had created the Euro, which survives despite its long-drawn-out agony. New bi- and multilateral arrangements to trade in alternative currencies are multiplying. And BRICs and China, with their New Development Bank, the Contingency Reserve Agreement and, above all, China’s Asian Infrastructure Development Bank, are creating a new financial architecture which rivals, and is likely to prove more attractive than, the dollar denominated Anglo-American international financial system. So much so that Britain itself has joined the AIIB.

So what does this mean for Manitoba? Well the Loonie is tied to oil prices, so don’t bet on a major exchange rate improvement. Do, however, bet on local strength. As the Conference Board told January’s Western Business Outlook conference, Manitoba performs third best in Canada. Only Saskatchewan has lower unemployment rates Why? First, Manitoba’s doing nothing dangerous. We don’t major in oil, global finance or NINJA mortgages. Our economy is diverse, and our manufacturers include high-tech producers like aerospace. We have a highly creative workforce. And, though this may surprise some, our immigration is a source of strength. 16,000 new arrivals annually, most entering the workforce within a couple of years, means the number of wealth-producers is growing by 1-2% even before productivity gains.

Here lies the key. Paradoxically, a recession is the time to buy, because prices are low. You can create new productive capacity provided the target is not a quick buck but tomorrow’s markets. Watchwords are distinction, innovation, people and partnerships. What can you make that is different? How can you stand out from the crowd? It could just be that tomorrow’s success stories will be those who invested in Manitoba’s special asset – its vibrant, diverse and growing workforce – those who produce local, but sell global as well as catering for the people next door, and learn to work with our global community to find partnerships and openings in the economies that are not only surviving the recession – but never entered it.

[1] Charts 3, 4 and 5 from the Federal Reserve Bank of St Louis’s excellent website. All other charts, and data sources, feature on our ‘Chart of the Day’ website page. Feel free to share but please acknowledge.