Professor Luc Soete: Work for All or Mass Unemployment Revisited 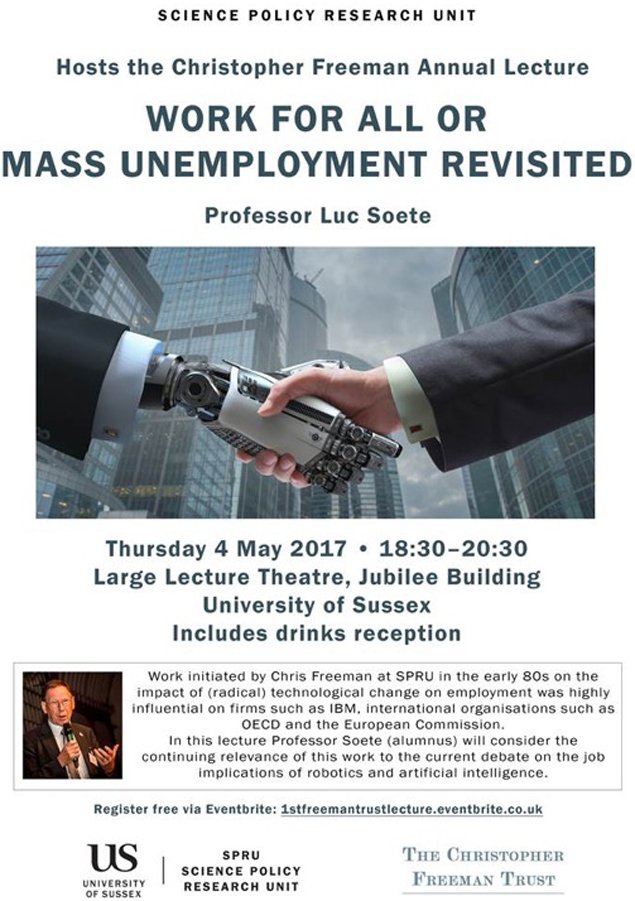 Professor Soete will revisit SPRU work from the early 80’s conducted in the framework of the Technology and Employment (TEMPO) project, which focused on the impact of (radical) technological change on employment.  The influence of this work, initiated by Chris Freeman, was in retrospect particularly significant. It led IBM –the world’s leading computer firm of the day – to devote attention to the employment implications of computer technology; it caused OECD to consider the role and impact of technological change on productivity and job creation in its “Job Study”, and obliged the European Commission to pay attention to the employment impact, skills demands and social dimension of new information technology.

Most of this work was written up in articles and policy reports, now and then summarized in books. Professor Soete will focus on the special relevance of Freeman’s work for the current on-going debate on the job implications of robotics and artificial intelligence, using amongst others the popular booklet: “Work for All or Mass Unemployment: Computerised Technical Change in the 21st Century” published in 1994 by Frances Pinter.

It is appropriate Professor Luc Soete is the first to be invited to deliver this new, annual lecture, held to remember the great influence of Chris Freeman. Luc, who is himself an alumnus of University of Sussex (Economics and SPRU), was a close colleague and personal friend of Chris Freeman. Among other work he co-authored the third edition of The Economics of Industrial Innovation with him in 1997, as well as bringing a valuable theoretical dimension to SPRU’s work on innovation.

Prof Soete has a PhD in economics from the University of Sussex and he was awarded an honorary degree by Sussex in 2016.

Over the past 30 years, Luc has authored, co-authored, and edited numerous books, articles and book chapters covering the broad fields of theoretical, empirical and policy studies of technological development and, in particular, innovation.

Until recently he was Rector Magnificus of Maastricht University in the Netherlands. He is a member of the Royal Netherlands Academy of Arts and Sciences and of the Dutch Advisory Council for Science and Technology Policy. He is Chairman of the high-level group ‘Research, Innovation and Science Policy Experts’ at the European Commission and is Chair of the SPRU Advisory Group and a member of the School of Business, Management and Economics Advisory Board.

The Christopher Freeman Trust was established by colleagues, friends and family members of Chris Freeman to preserve his legacy and to place his wide contributions to human knowledge and understanding at the disposal of future generations. Find out more here.

Professor Chris Freeman (September 11, 1921 – August 16, 2010), an economist, was one of the most eminent researchers in innovation studies, and prominent among modern Kondratiev wave and business cycle theorists. Alongside his role as Director of SPRU, Chris was RM Phillips Professor of Science Policy and later Professor Emeritus at University of Sussex. His fields of specialisation were the economics of innovation and technical change, science and technology indicators and definitions of R&D (leading to the 1963 Frascati Manual), the diffusion of technologies, structural change in the world economy, and the ‘catch-up’ efforts of developing countries. His influence on generations of researchers was wide and profound and is expressed throughout the many personal SPRU Stories that appear later in this book. Programmes that have their origins in his work can be traced at leading public policy institutions across the world.