In this webinar, the speakers paid particular attention to the achievements, complexities and contradictions of the evolving model of socialist economic development in China, Vietnam and Laos. This panel was jointly organised by the International Manifesto Group and Friends of Socialist China.

In this launch event for the English-language edition of ‘Socialist Economic Development in the 21st Century’, authors Elias Jabbour and Alberto Gabriele were joined by several experts in Marxist political economy from China, Britain and Canada to discuss the book’s central thesis: that, a century since the first socialist revolution broke the global monopoly of capitalism, socialist economic construction continues to offer the most viable alternative to the globalized capitalist crisis. We will pay particular attention to the achievements, complexities and contradictions of the evolving model of socialist economic development in China, Vietnam and Laos. This panel is jointly organised by the International Manifesto Group and Friends of Socialist China.

Elias Jabbour is Adjunct Professor at the Faculty of Economic Sciences, Postgraduate Programs in Economic Sciences, and International Relations at the State University of Rio de Janeiro. He is co-author of Socialist Economic Development in the 21st Century. VIDEO

Alberto Gabriele is a Senior Researcher at Sbilanciamoci, Rome, Italy. He is co-author of Socialist Economic Development in the 21st Century. VIDEO

John Ross, Senior Fellow at Chongyang Institute for Financial Studies, Renmin University of China. Since 1992, and the publication in Russia of his ‘Why the Economic Reform Succeeded in China and Will Fail in Russia and Eastern Europe, ’he is the author of over 500 published articles on China’s economy and geopolitical relations. He has more than one million followers on Weibo, the Chinese equivalent of Twitter. His articles on China’s economy have won several prizes in China. He is author of two best-selling books published in Chinese ‘ –The Great Chess Game ’and ‘Don’t Misunderstand China’s Economy’. His new book in English ‘China’s Great Road ’is published this month. VIDEO

Radhika Desai is a Professor at the Department of Political Studies, and Director, Geopolitical Economy Research Group, University of Manitoba, Winnipeg, Canada. She is the author of Geopolitical Economy: After US Hegemony, Globalization and Empire (2013) VIDEO

Cheng Enfu (video recording and with Liu Zixu’s assistance) is an academician at the Chinese Academy of Social Sciences (CASS), Director of the Research Center for Economic and Social Development (CASS), principal professor at the University of the Chinese Academy of Social Sciences, President of the World Association for Political Economy, president of Chinese Society of Foreign Economic Theories, and member of the People’s Congress of China.Cheng Enfu spoke through his translator, Zixu Liu. VIDEO

Peng Zhaochang taught at Rollins College in the US before going back to China and now working at Fudan University in Shanghai. He received his Ph.D. from UMass Amherst where Prof. David Kotz was his chief adviser. VIDEO

Michael Roberts worked as an economist in the City of London for various financial institutions for over 40 years – in the heart of the beast! He has written several books including: The Great Recession – a Marxist view (2009); The Long Depression (2016); Joint ed: World in Crisis (2018); Marx 200 (2018); and Engels 200 (2020). He is joint author with G Carchedi of a forthcoming book published this summer by Pluto Press: Capitalism in the 21st century – through the prism of value. VIDEO

Moderator – Jenny Clegg an independent writer and researcher, a long time China specialist, and a lifelong member and now a vice-President of SACU. A former Senior Lecturer in International and Asia Pacific Studies, her published work includes China’s Global Strategy: towards a multipolar world, Pluto Press, 2009). She is active in the peace and anti-war movement in Britain. VIDEO

This article was updated on May 31, 2022 to include links to videos of the presentations. 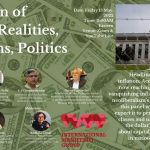 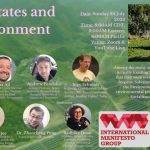